This QPME guide provides information and learning resources about the United States Marine Corps role during the attack on Pearl Harbor, December 7, 1941.

Of course they had already started taking out the machine guns. They didn't wait for the key in the OD's office, they just broke the door down and hauled out the machine guns, put them in position. Everybody that wasn't involved in that drill grabbed their rifles and ran out in the parade ground, and started firing at the airplanes. They must have had several hundred men out there with rifles. And every [Japanese] plane that was recovered there, or pieces of it, had lots of .30-caliber holes — somebody was hitting them, machine guns or rifles. 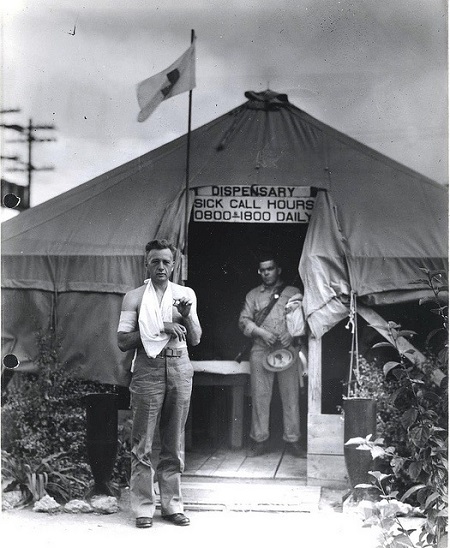 Pearl Harbor Survivor, 8 December 1941. The caption reads, "Technical Sergeant Anglin was wounded in action."  Anglin is seen here holding up a piece of shrapnel removed from his arm. From the Claude Larkin Collection (COLL/791) at the Archives Branch of the Marine Corps History Division. Official USMC photograph.