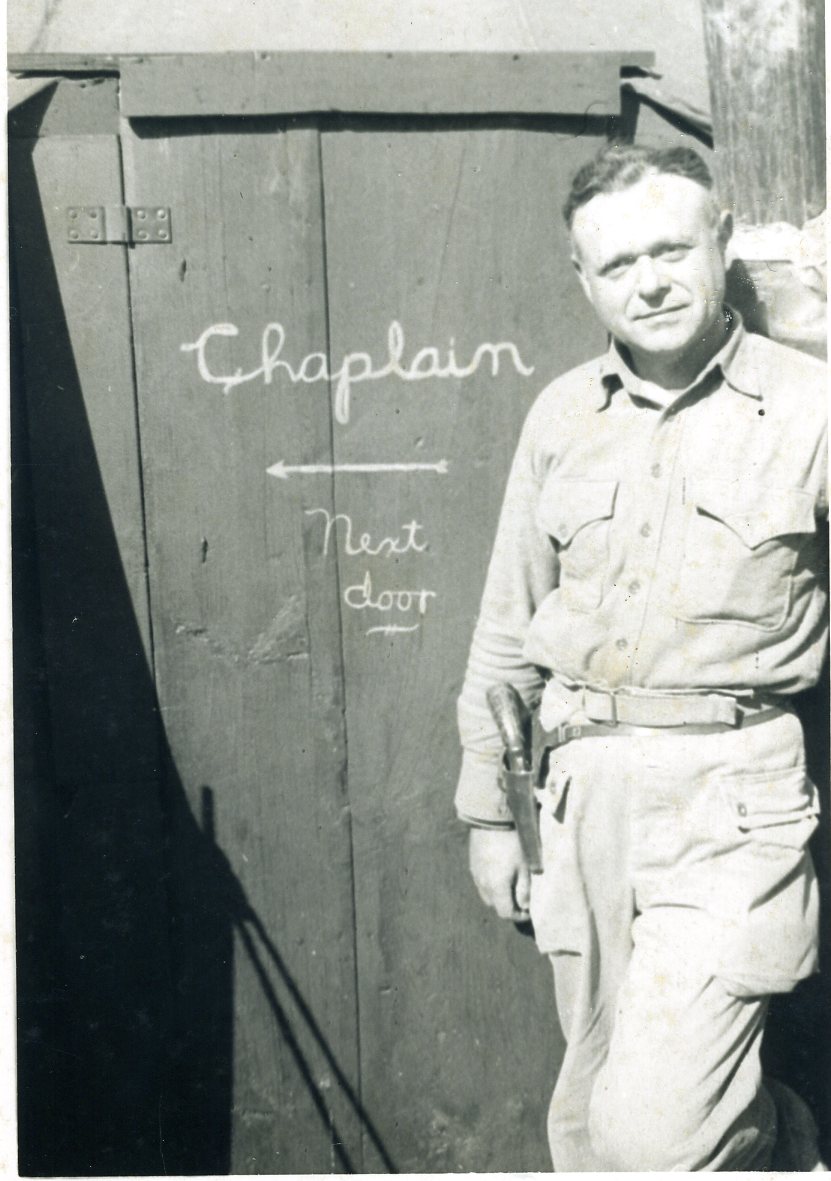 Scope and Content: The Elihu H. Rickel Collection consists of photographs; correspondence; clippings; programs; publications; and one (1) CD of scans of a 1945 scrapbook related to the career of Elihu Rickel as a Jewish United States Navy Chaplain primarily during World War II and the Korean War. 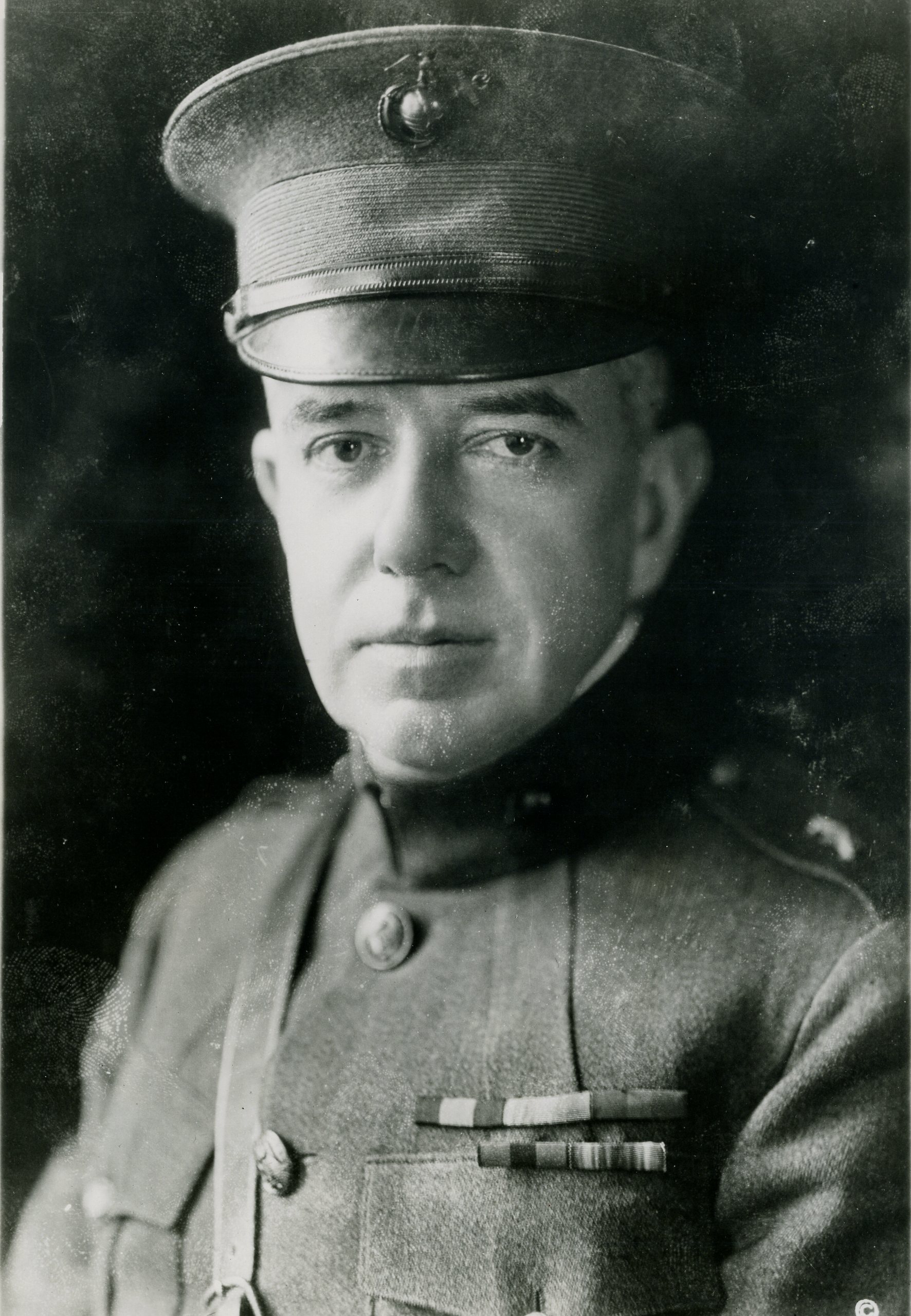 Scope and Content: The John H. Russell, Jr. Collection documents Russell’s professional life from 1888 to 1947 (bulk 1943-1947).  The collection includes correspondence, diary reports, writings, speeches, commendations, clippings, and photographs covering Russell's career from entry to the Naval Academy in 1886 at age fourteen through his post-retirement career as a columnist for the San Diego Union. The bulk of the collection concerns Russell’s duty in Haiti as Commander of the 1st Provisional Brigade and High Commissioner.

Russell's papers provide a background for understanding the transformation of the Marine Corps from a conglomeration of small detachments into a major naval arm; and from the source of ad hoc expeditionary units into a command capable of task-organizing flexible, balanced projection forces to meet the needs of the fleet. While this collection does not detail the development of the Fleet Marine Force concept, it identifies many aspects of the milieu in which the concept evolved. More especially, it limns the career of the leader who nurtured these ideas, codified them into a practicable doctrine, negotiated their adoption, and ensured implementation in combined fleet exercises. From theory to operational fact, it was Russell who sired the Fleet Marine Force.

The papers retained from Russell’s early service in Haiti pertain primarily to defending his command against problems he inherited. Papers retained from his tenure as Commandant are dominated by the controversial remarks made by Smedley Butler. These two topical areas provide focal points of interest in the collection.

Certainly the materials from Haiti are the most intriguing segment of the collection, as much for what they do not say as for what they do. From the American perspective side, they reflect the boring day-to-day routine —spiced with moments of high drama —which characterizes most any military operation. From the Haitian side, they expose the reader to flamboyant political opportunism. There are random samples from an arena in which ignorance, greed, superstition, counter-racism, anti-colonialism, and pride in a decayed culture all melded into a rhetoric of the underdog who had something to gain and nothing to lose. There are some contemporaneous translations included. Additional documents have been translated by Nancy Gordon Heinl [Mrs. Robert Debs Heinl], who was fluent in Haitian Creole.

Russell's post-retirement career as a pundit afforded him a public venue in which he could propound strategic theory in the lively context of World War II. In this capacity Russell proved himself a mature naval strategist, combining the diverse tactics of the Navy and Marine Corps into a synergistic whole.

The collection includes 342 weekly columns from the San Diego Union, published during the 514-week span of Russell's tenure as a newspaper columnist. Other papers published many of these columns on the same or later dates. In all cases, the headlining (including "kickers" and subheads) were not written by Russell, but reflect editorial impressions of his messages expressed according to protocols of space and type size.

Naval historians studying the Civil War will delight in Russell's collection of documents pertaining to his father, Rear Admiral John H. Russell, Sr. Russell's own family and personal life are not represented in the collection, except for an occasional mention in correspondence. 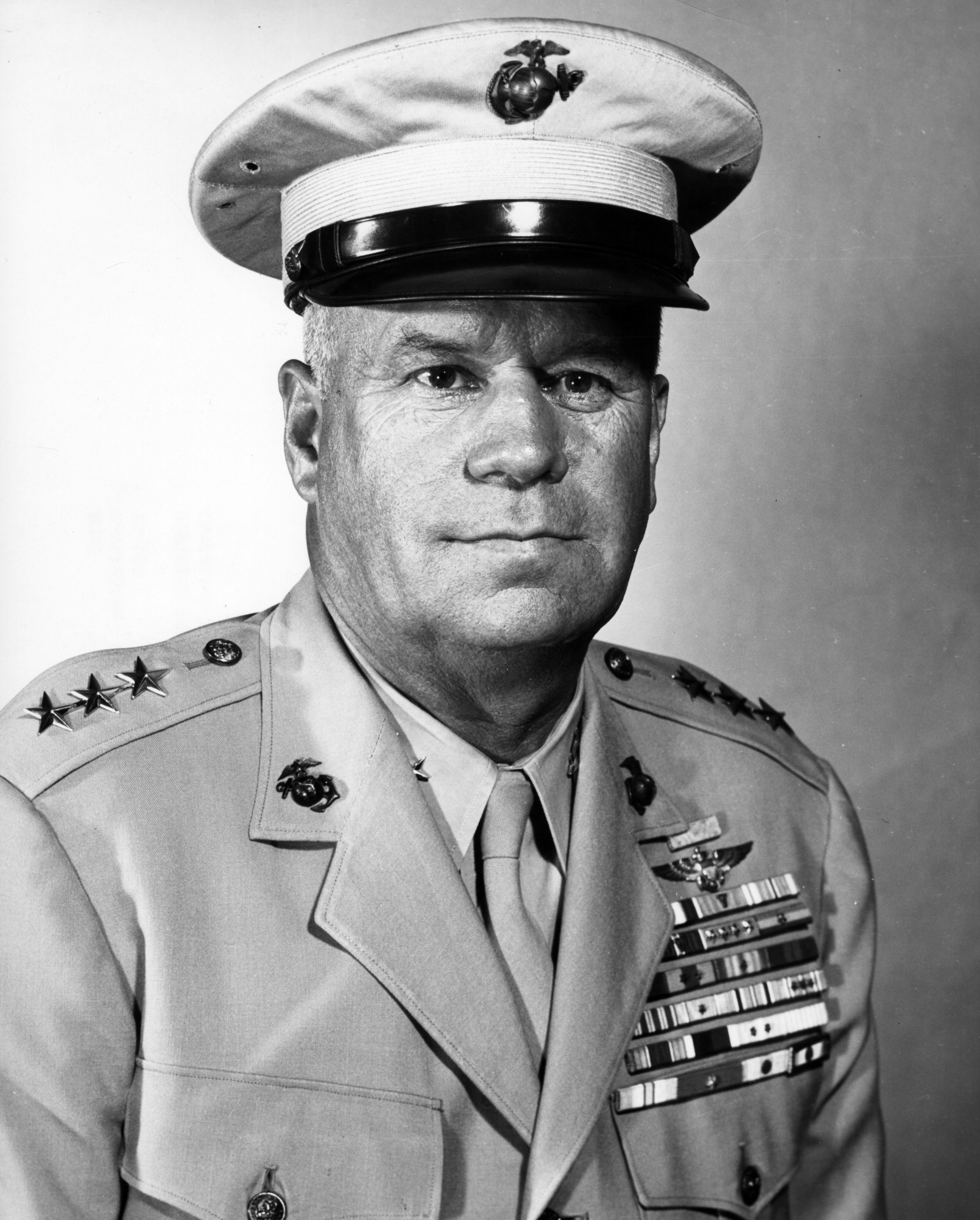 Scope and Content: The papers of Christian F. Schilt consist of materials related to his Marine Corps career as an aviator, Island Commander of Peleliu, and Commanding General, Air Defense Command, 2d Marine Aircraft Wing, on Okinawa. The dates of the collection range from 1921-1960. These materials include personal and official correspondence, service records, flight logbooks, drafts of Historical Division publications sent for his review, booklets, and programs.The collection also contains photographs documenting Schilt’s service in the Dominican Republic, Peleliu, and Okinawa. An oversize folder contains a World War I Second Division Citation; maps of the Panama Canal Zone; and various newspapers. 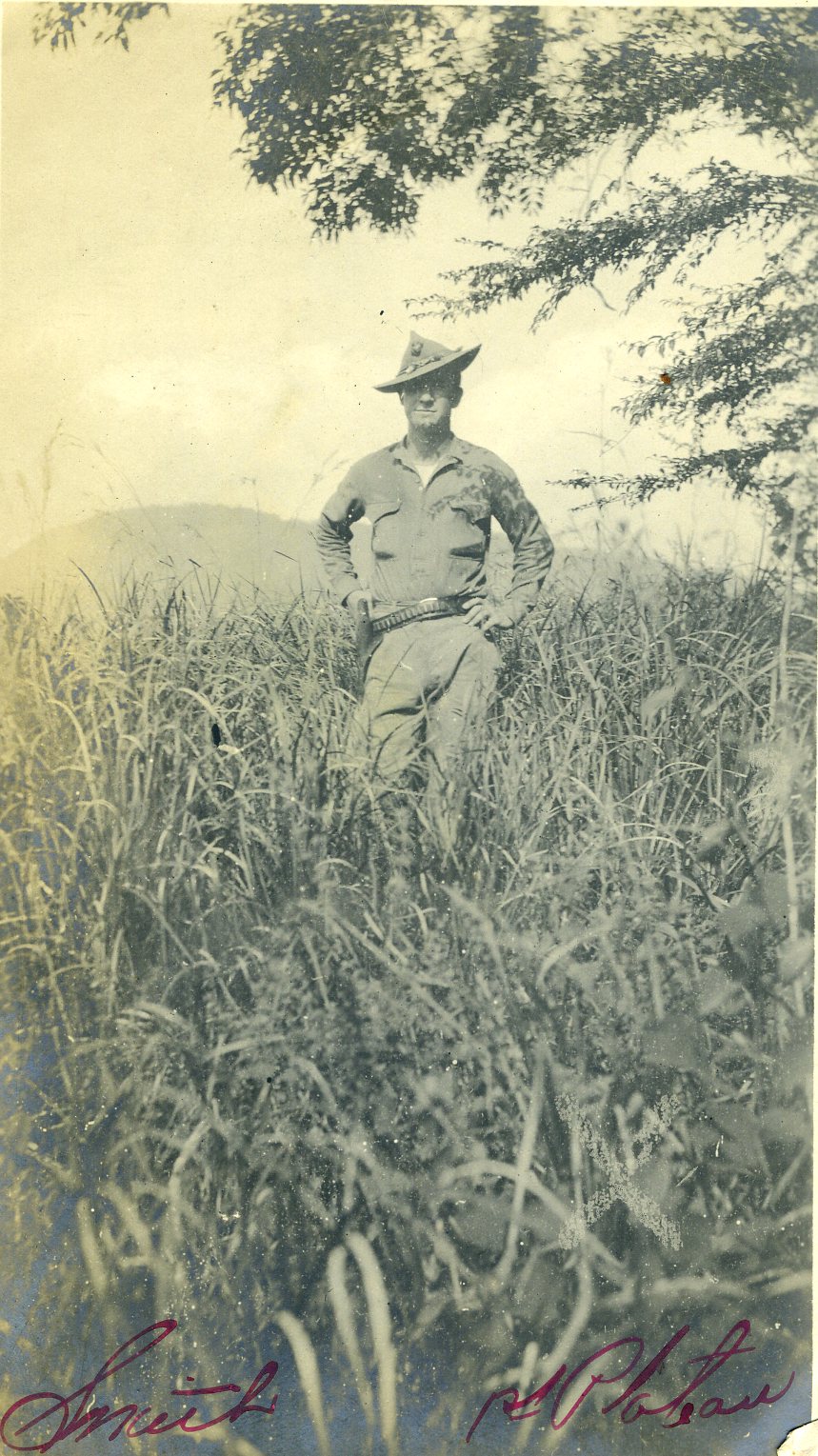 Frequently referred to as the father of modern amphibious warfare, Holland M. Smith was one of America's top commanders in the Pacific during World War II. He retired in 1946 after a 41-year career that included sea duty, expeditionary service from the Philippines to Haiti, and World War I combat in France.

On the eve of World War II Smith directed extensive Army, Navy and Marine amphibious training that greatly contributed to the success of US landings in the Atlantic and Pacific. He later helped prepare US Army and Canadian troops for the Kiska and Attu landings, before leading the V Amphibious Corps in the assaults on the Gilbert Islands, the Marshall Islands, Saipan and Tinian in the Marianas, and the recapture of Guam. He then served as the first Commanding General of Fleet Marine Force, Pacific, and headed Task Force 56 at Iwo Jima.

Smith's collection of papers is representative of his entire career in the Corps, with an emphasis on amphibious doctrine. Of particular interest are memoranda and correspondence related to the controversial “Smith vs. Smith” incident, in which Smith requested the relief of US Army General Ralph C. Smith, commander of the 27th Division. This action sparked an inter-service rivalry between the Marines and the Army in the Pacific Theatre.

Another interesting facet of the collection is the nearly 900 photographs, particularly official photographs from World War II and Korea. These photographs were numbered during accessioning; these numbers have been retained, and are grouped in chronological order. Each has photograph has been described, to include their dimensions.

Other items in the collection include statements given before the Armed Services Committee of the House of Representatives investigating the usefulness of the B-36 bomber; correspondence dealing with Lieutenant General Robert C. Richardson, Jr. and Major General Ralph Smith; comments and opinions on Smith's book, “Coral and Brass;” a transcript of a news broadcast by Don Pryor that was recorded off the coast of Iwo Jima during the campaign, in which he interviews Smith and Vice Admiral Richmond K. Turner; a letter from General Thomas Holcomb to Vice Admiral George C. Dyer, dated 5 March 1961, on Holcomb's original selection of Smith for duty with the Fleet Marine Force; a compilation titled "The Balanced Fleet," consisting of printed items expounding the balanced-fleet concept and the inseparable relationship between that concept and the existence of the Fleet Marine Force; and a folder titled "Accolades from the Armed Forces," which contains approximately 75 testimonials to Andrew J. Higgins for his role in producing the amphibious vehicle known as the Higgins boat. A representative collection of photographs, including motion picture film coverage of the campaigns for Tarawa and Saipan, and the dedication ceremony of Camp H. M. Smith, Hawaii, round out the collection.  Series in this collection include correspondence; official records; research materials; personal papers; and photographs.  Within each series the collection is arranged chronologically. 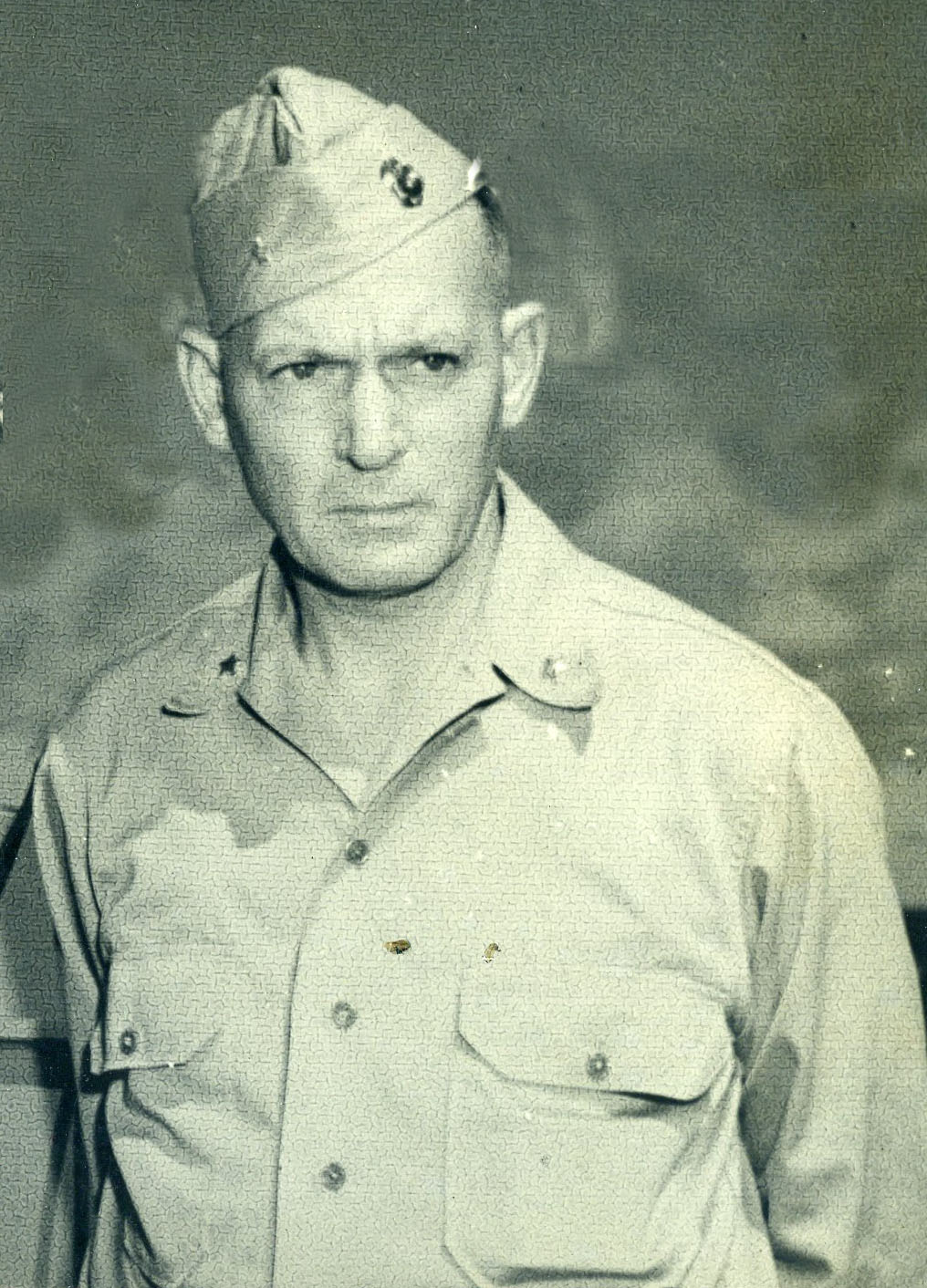 Scope and Content: This collection consists of material documenting Lemuel C. Shepherd's Marine Corps career from 1917-1956. From 1952-1956, Shepherd served as Commandant of the Marine Corps. The collection includes an 11 page typewritten manuscript "My Visit to Japan"; written while commanding the 6th Marine Division; a 12 page typewritten manuscript "The Bloody Angle of the AEF" by William E. Moore, printed in the American Legion Weekly of 24 February 1922; a Tsingtao newspaper; orders; and various individual papers dealing with articles written about the Marine Corps. Photographs comprise the bulk of the collection. Images include the unveiling of the Iwo Jima Memorial; Marines on Guam; Marines on Okinawa; the Japanese surrender in China at the end of World War II; the Inchon landing; and of Shepherd himself attending various official functions. Three oversize boxes contain one photograph album of the Naval Academy in Argentina; an "Album of Signatures of the Tientsin Communities Presented to the U.S. Marine Forces in Tientsin on the First Anniversary of V-J Day," dated 15 August 1946; and one bible which belonged to H. Allen Taylor who married Anna, daughter of General Archibald Henderson on 23 April 1845. The Bible includes a statement by General Shepherd concerning the gift of the Taylor Bible, by Miss Katherine E. Bradley, accepted by General Shepherd for the Marine Corps while he was Commandant of the Marine Corps. Lastly, an oversize folder contains one copy of the poem, "Sugar Loaf Hill" by Louis J. Maloof, given "To my Commanding General" by Maloof; a photograph of the Marine Corps War Memorial signed by Felix de Weldon; and a photograph of the Marine Band participating in the American Legion Parade down Pennsylvania Avenue in 1954. 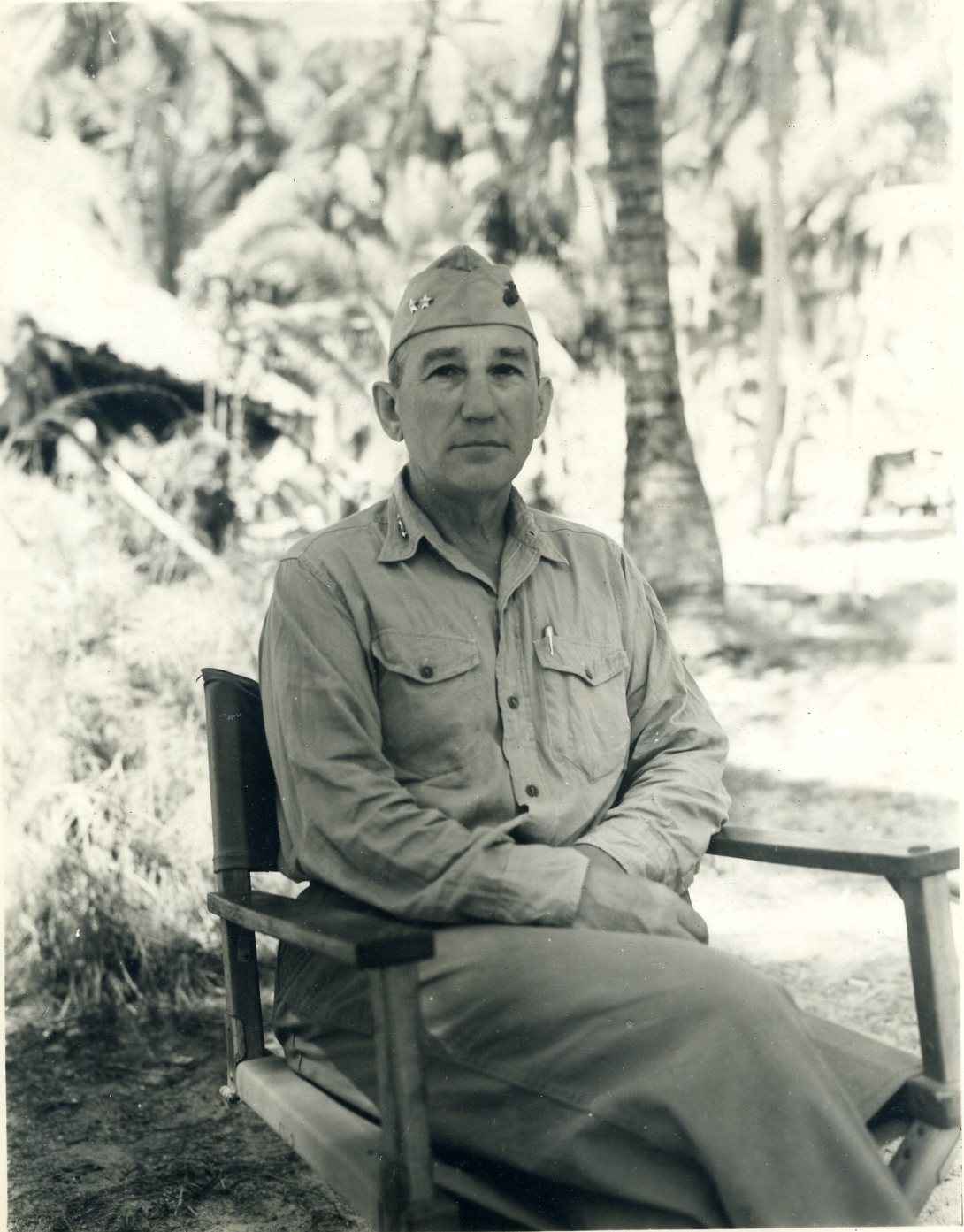 Scope and Content: The papers of Julian C. Smith consist of materials relating mainly to his career with the Marine Corps and his position as Commanding General of the 2d Marine Division on Tarawa during World War II.  Prior to World War II, the collection contains papers related to Smith’s service in Nicaragua, including copies of The Guardia Nacional de Nicaragua, a history of the Marines in Nicaragua during the 1920s and 1930s, cowritten by Smith; and Guardia newsletters and newspaper clippings. Also during this time frame, Smith was involved in numerous Marine Corps exercises in the Caribbean.  The collection contains maps, instructions, and reports on the outcome of exercises held at Culebra and Vieques, Puerto Rico; Cuba; as well as Quantico, Virginia. Official records from World War II include those related to the 2d Marine Division’s actions on Tarawa. Included are Operation Plans, orders, memoranda, studies, and casualty lists. Also included are planning records for Operation Stalemate, the landing on Peleliu. Julian Smith’s correspondence covers two series in this collection. Included is incoming and outgoing, official and personal. Of note are letters between Julian Smith and Alexander Vandegrift and Holland Smith. The last series in this collection consists of material belonging to Harriotte Smith, Julian Smith’s wife. Prior to her marriage to Julian Smith, Harriotte was married to William Byrd, a Marine pilot who was killed in an airplane crash in Nicaragua. The bulk of this portion of the collection consists of correspondence between Harriotte and Julian. Of note are his letters describing the actions of Marines on Tarawa and his candid remarks about other Marine Corps personalities that he shared with his wife. There is also correspondence between Harriotte and William Byrd and photographs and newspaper articles related to his death. Six boxes contain photographs collected by Smith. The bulk of these images are official Marine Corps photographs taken on Tarawa and from other Marine Corps engagements in the Pacific.