Scope and Content: The Levi Twiggs Collection is composed of approximately 100 items, primarily holographic letters, written by Major Levi Twiggs and his son, Lieutenant George D. Twiggs, to members of the Twiggs family.  At the outbreak of the Mexican-American War in 1846, Twiggs and his son were ordered to combat duty.  Though the correspondence is devoted almost exclusively to the subject of the war with Mexico, the letters nevertheless contain a graphic insight into the life of a military family of the mid-nineteenth century.  Priscilla Decatur Twiggs, to whom the majority of the letters were addressed, was the granddaughter of Stephen Decatur, one of the great heroes of the American Navy.  Also included in the correspondence are letters from Twiggs’ brother, Brigadier General David E. Twiggs, who commanded the 1st Brigade of the 2nd Army Division in Mexico.  Correspondents include: Commandant Archibald Henderson; Parke G. Howle; George W. Walker; Henry B. Sears; John G. Reynolds; and W. Ballard Preston.

Scope and Content: As the collection was partially processed and preserved, the validity of the order (i.e., if the inherited order was original) cannot be ascertained. Collection was previously arranged alphabetically by file title. The order was amended and the papers reordered into the series and subseries indicated below. The papers are arranged chronologically within these series.

Series 1 contains materials related to Utley’s research and education. In addition to papers and articles, this series includes maps (some have been relocated to oversize folders 1 and 2), photographs, and ephemera.

Series 3 contains official memoranda, orders and reports and other materials created or collected by Utley while commanding the Marine Detachment in Nicaragua, as well as a small amount of material from his service in Haiti. This series contains two ledgers.  The first is “Officers of the United States Marine Corps Who Have Resigned, Been Retired, Etc.” (March 1912 to March 1916). The second is a facilities ledger, containing records of heating, electricity, laundry facilities and refrigeration for Marine Corps barracks and detachments (including Guantanamo Bay, Cuba; Mare Island, California; Norfolk; Parris Island; Pearl Harbor; Portsmouth; Quantico; San Diego; Peking, China; Philadelphia Barracks; and Philadelphia Depot).

Series 4 contains official US Navy telegrams documenting the daily communications between Utley and the commanders of units in the field in Nicaragua. Given the volume of these communications, and their tendency to be referential to one another, these have been filed separate from the more traditional correspondence in Series 3.

Series 5 is comprised of Utley’s “Tactics and Technique of Small Wars” manuscript, college term papers, and short stories. The series is dominated by a finished draft of “Small Wars.” This treatise was an early effort to present small wars doctrine, which would be instrumental in the creation of the Marine Corps’ Small Wars Operations. Section IV is missing from the draft. It is unknown if this section is lost or if Utley incorrectly numbered his sections. Series 5 also contains a short story, “The Lieutenant’s Honor,” which exists in several undated, variously completed drafts.

Series 6 is comprised of oversized materials relocated from Series 1, Series 3, and Series 5. 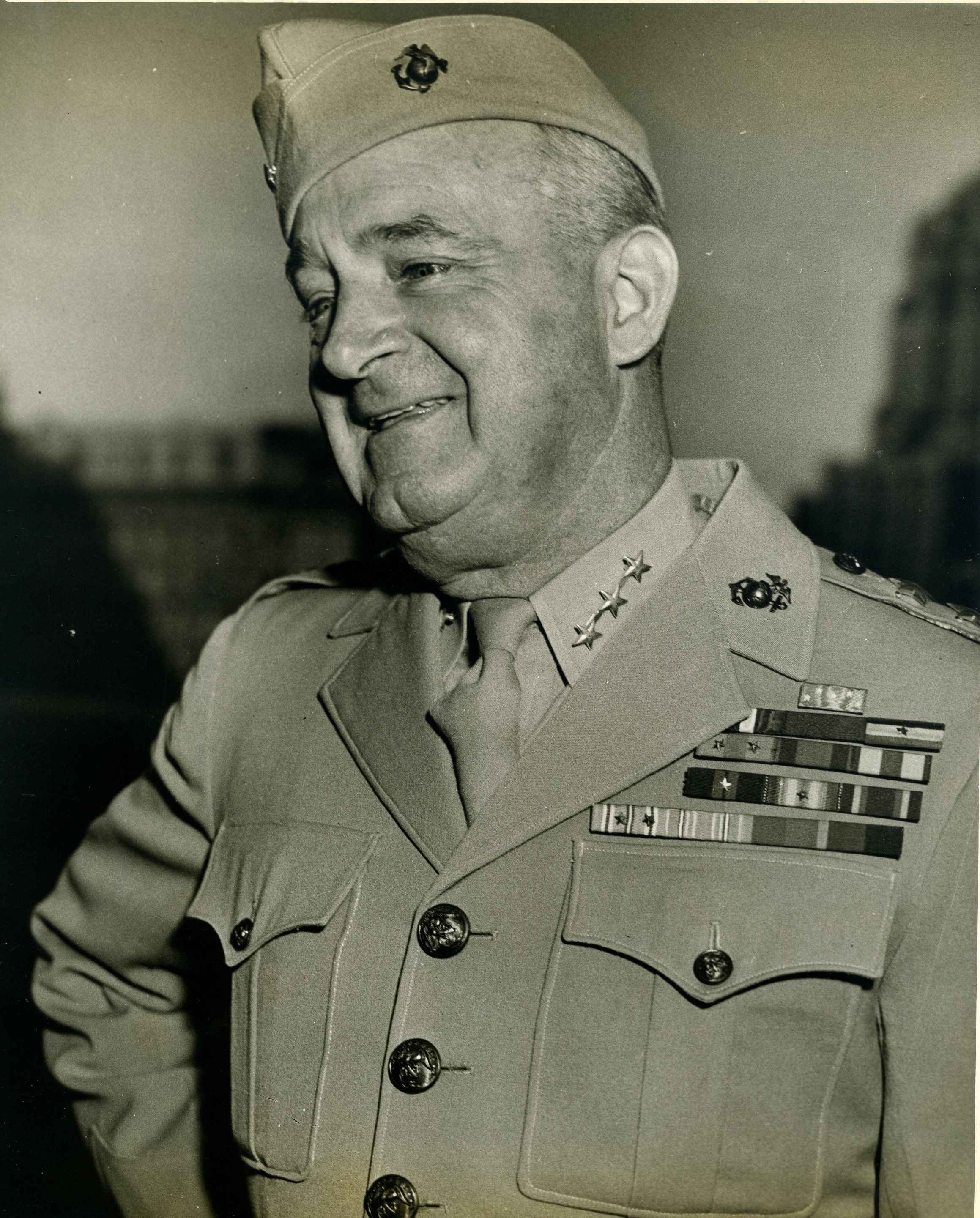 Scope and Content: This voluminous collection is comprised of documents and materials related to the Marine Corps career of Alexander A. Vandegrift. Included are correspondence files; a manuscript and related research materials for Vandegrift’s biography, "Once a Marine", written in collaboration with Robert B. Asprey; subject files concerning the military unification legislation of 1947; numerous speeches and speech notes, mainly emphasizing the defense of the nation and amphibious force in readiness; numerous photographs; newspaper clippings; and ephemera and other personal papers.

The correspondence files, arranged chronologically, span Vandegrift’s military and post military career. The speeches reflect Vandegrift's pronouncements on the role of the Marine Corps during his tenure as the Commandant and during his involvement in controversy over the National Security Act of 1947 wand his efforts to ensure the autonomy of the Marine Corps as the nation's amphibious force-in-readiness.  The collection is arranged chronologically within each series. Series in this collection include correspondence; orders, memoranda, and reports; personal papers; and photographs. 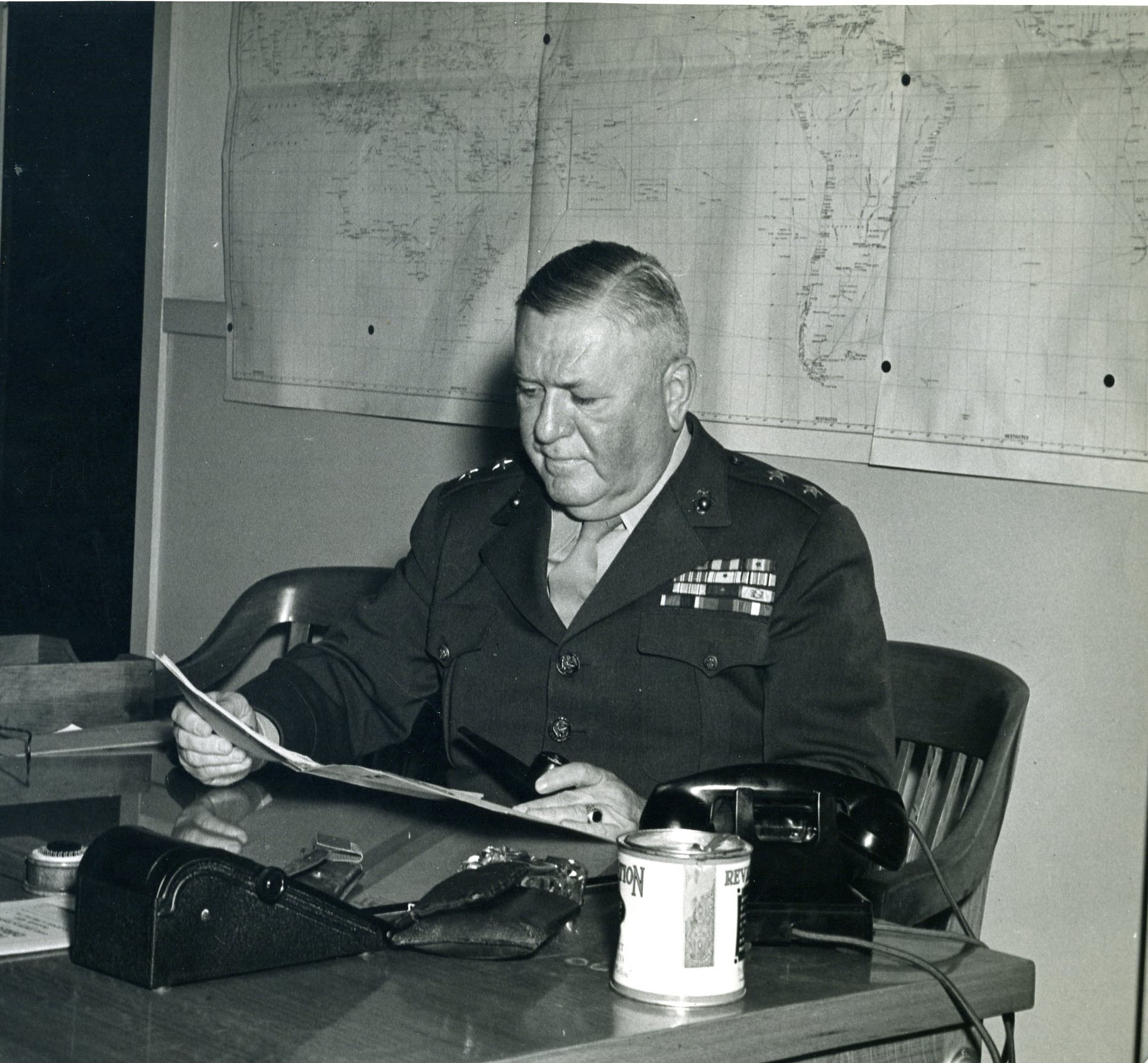 Scope and Content:  The voluminous Clayton B. Vogel Collection is composed of over 18,000 items documenting Vogel's long career, which began in the US Army, and following graduation from Rutgers University, continued for 42 years in the Marine Corps. Vogel’s varied tours during his long career included duty stations in China, Nicaragua, Haiti, the Panama Canal Zone, and Cuba.

Vogel's collection is representative of his entire career in the Corps, and there is ample material concerning each of his tours of duty. Of particular interest are the official records and correspondence dated to his service in Haiti in the 1930s, as well as ledgers and logbooks of Marine Detachments commanded by Vogel in the Panama Canal Zone and aboard the USS Wyoming.

The most thorough endeavors to arrange, describe, and preserve this collection have been reserved for the all but the last three series in the collection: Financial Records, Law School Materials, and Personal Papers. These materials are not representative of the scope of the Vogel collection or as a document of his Marine Corps career. As such, these materials have been minimally processed. Please contact the Archives for more information about these series.

Of the materials in the collection concerning the genealogy and history of the Vogel family, notable items include 20 letters written by Massachusetts Senator and statesman Daniel Webster to his sister, Emeline Webster Lindsly, dating from 1826 through 1839.

Within each series the collection is arranged chronologically. Series in this collection include correspondence; official records; reports and working papers; ledgers; and photographs.